Mao Gakiya received an Encouragement Award in the 2019 Etegami Competition

Mao Gakiya received an Encouragement Award in the children’s division of the 2019 Etegami (which is Japanese postcard art that combines an image with a message) Competition, which was organized by Fude No Sato Kobo. Mao used her calligraphy brushes carefully to produce delicate lines and colors when creating her Etegami. Her Etegami will be shown at the Etegami Award Winners’ Exhibition at the Museum of Fude Art (Fude No Sato Koubou) in Hiroshima Prefecture from January 4th to 26th, 2020.

The theme of this year’s Etegami Competition is “Thank you.” In Mao’s Etegami, she wrote, “Thank you for becoming a part of my family.” 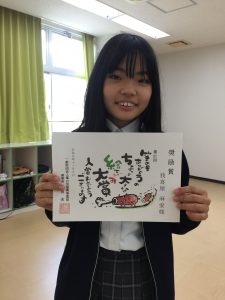 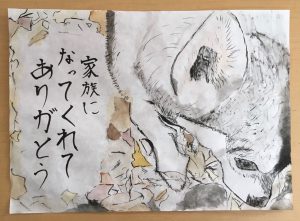